Rincon, Ga., is growing into a bedroom community for Savannah, 30 minutes away. But long awaiting those new residents is 20-year-old Lost Plantation Golf Club.

No. 9 at Lost Plantation Golf Club plops down all kinds of sand in the fairway and at the green. Shot placement is everything.
«

Over the years, a bevy of houses have arisen around the golf course, ranging in size from massive to mini. No worries, though, the range of residents all play well together at Lost Plantation.

Lost Plantation is a sassy course that challenges golfers with huge, numerous bunkers around the green (a few without any option other than to fly the ball), and disappearing fairways, a magic trick demonstrated on the first hole.

It's a dogleg left and once you get to your first shot, you'll see there aren't a lot of landing options for your second shot on the short par 5, just a sliver of a fairway between dominating marshes. The fairway takes a sabbatical on No. 3, too, giving you far fewer options approaching the green on the par-4 hole.

Julia Smith, club manager, cheerfully advises you to "use old balls on the first three holes." Listen to her.

Lost Plantation G.C.: Nothing easy about it

Nope, this is not a cakewalk golf course. It does have some cakewalk holes, though, for variety - and to get one's stress back to reasonable levels.

The greens are large, fast and sloped. One in particular, the par-3 11th, is crowned, and the day I played, the grounds crew put the flag at the crest. Funny, guys, real funny.

It's not a long golf course, measuring from 5,030 yards to 6,657 yards metered out among five tees, so don't assume driver on every hole. For example, the best play on the short No. 2, just 317 from the whites, is mid-irons off the tee for your preferred length to the green. But if you're on your game, take out a wood and try for the green over the trees, bunker and marsh. It is the epitome of risk-reward.

Tom Buie, an 18-handicap player, has been a member of Lost Plantation Golf Club since it opened.

"It's long, tight and challenging," he said, adding that his favorite hole is No. 12, a 337-yard par 4 from the whites, "because you can almost drive it."

But No. 12 has its risks, with marsh across the fairway two-thirds of the way in.

Eric Lucas, a 4-handicap, said Lost Plantation Golf Club tests your skills. "You can't spray the ball because you can't see another fairway. You have to shape your shot."

No. 17 is one of the prettiest on the golf course. The back tees have to contend with a pond, and shorter hitters, even from the front, have to worry about dribbling their drive because there is a mound at the base of the fairway that could send those shots in any direction. The green is unapproachable other than with a short iron or a roundabout approach from the right front corner. Otherwise, its sand front, left and right. The green itself is amoeba-shaped and slopes sharply left front.

Lost Plantation Golf Club's finishing hole is a dogleg left with a pond in front of the green but with an escape value on the far right side. Picking a distance visually is tough because of the distracting backdrop of houses. The flag is difficult to home in on. If you mis-hit, your ball likely will wind up wet or sandy.

There is no question this is a casual golf course. The course is a little scruffy, but it dishes out some formidable golf.

All that takes a back seat, however, to the friendliness of the staff and the camaraderie one senses from the regulars.

Sit out on the deck and take in a beautiful view of woods and fairways. You might even skip the golf. 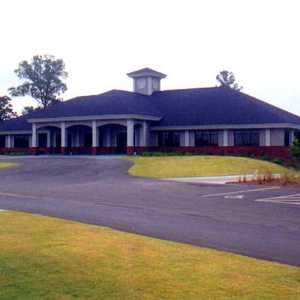