COVINGTON, Ga. -- A new name has not meant overwhelming changes at Ashton Hills Golf Club. And that's a good thing.

Put Ashton Hills on your must-play list, especially if you live on Atlanta's east side.
«

Formerly Indian Creek Golf Club, Ashton Hills got a new name and a new look in 2012 when it changed ownership. The design was originally crafted in 1997 and it became popular almost immediately, earning the title of "Atlanta's Best New Course" that year by Georgia Golf News. The unique character of the first design was kept in tact but golfers will find that the layout is now more player friendly with slightly wider fairways, shorter rough, and less severely sloped greens.

The course, located about 40 minutes east of Atlanta in Covington, always drew high marks from players. The Desmond Muirhead design was challenging and entertaining, and conditions were always good.

Unfortunately, Ashton Hills was one of the places slammed by the recession. The owners of the golf course -- then known as Covington Plantation -- were in the building industry, a sector of the economy that's still trying to recover. And when construction stopped, so did the money to run the club.

In August 2012 a new group of investors took over and changed the name to Ashton Hills -- Ashton is one of the partner's sons, and Hills is a tip of the cap to the rolling terrain. Most of the existing members of the club stuck around. It's like nothing really changed.

The changes that have occurred are for the best. The new group has put more than $1 million into the property, updating the clubhouse, purchasing a new fleet of golf cars, re-doing the bunkers and converting the greens from bentgrass to Bermuda grass.

"It's been well received. We've gotten a lot of good comments," said PGA Professional Bryan Raines, who has been at the facility for 13 years. Through the first six months of 2013 the course was about 1,000 rounds ahead of the previous year.

The conversion to Bermuda grass makes the course play more difficult. Since the greens were harder and rolled out more than the old bent greens, crews re-contoured the slopes on seven greens to make them more playable. Most of the greens remain medium-to-small sized. They're still not easy, and many have false fronts or edges that drift away into collection areas.

The other big change was the decision to flip the nines. The 18th hole is now a 518-yard par 5 that's fraught with difficulty rather than the rather boring ninth hole, a 419-yard par 4.

Raines had a chance to talk to Muirhead about a month before his death. He asked the designer what the finishing hole was so bland, especially after so many other interesting holes along the way.

"He told me the course was so hard that he wanted to give people a chance to make a par so they would come back," Raines said with a smile. "I could see his point."

There's nothing boring about most of the layout, which features some of the best of the amazing Muirhead's quirky side. The third hole is a par 3 whose green is surrounded by a series of bunkers, giving it the appearance of flower from the elevated green.

Even more artistic is the eighth hole, a par 5 that is shaped like a woman. There's a bunker that surrounds three quarters of the green, like sandy hair. And those two large mounds about 50 yards from the fairways make you wonder if Muirhead had Dolly Parton on his mind during the design process. While the hole is a little contrived, it's also fun to play. You can just imagine Muirhead having a laugh about it.

Ashton Hills isn't a long golf course; it maxes out at 6,870 yards from the back tees. But this is not a course that can be overpowered by a long hitter. In fact, most of the fairways seem to narrow in the areas where the long drivers tend to land.

"Length is not a factor. Straight is a factor," Raines said. "The longer you hit it, the narrower it is."

The par 3s are outstanding. No. 3 (the flower hole) plays 188 yards from the back tees. No. 6 is a 200-yarder that must carry a pond to a green that slopes forward; anything short doesn't have a chance. The 13th is a 152-yarder over water to a green that is guarded by a brick wall; don't expect to get a break on any bounce here. The 16th is a 215-yarder to a green cut into a hill.

The no. 1-handicap hole is eight -- a 523-yard par 5. The difficulty here comes with the approach shot; anything off target is destined to roll into a collection area on either side of the narrow fairway.

The most difficult par 4 is no. 14, a dogleg right that leaves little room for error. Anything to the right is dead on this 463-yard beauty. And if you get to the dogleg, you'll be firing at a green guarded on the left side by a wetland hazard. A par here is a great score.

Ashton Hills is a player's course. Nearly one-quarter of the members have a handicap of 5 or less.

By all means Ashton Hills Golf Club should be on your must-play list, especially if you live on the east side of Atlanta. Conditions are always above average, the course both challenging and fun, and the staff is friendly and welcoming.

The practice facilities are excellent. The range has grass tees and is roomy enough to accommodate everyone, even on a busy day. The range balls are complimentary when you play. There is also a large putting green.

There is an outside snack bar that is conveniently located at the turn. The Village Grill inside the clubhouse has an extensive menu that includes more than just golf course fare. You can get rib-eye steaks, ribs and salmon, as well as soups and salads, as well as big burgers. 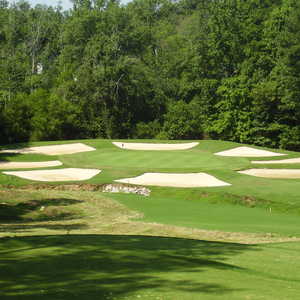 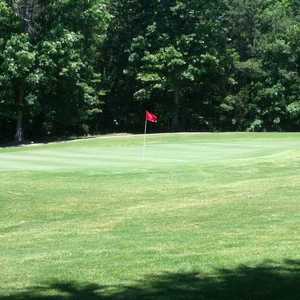 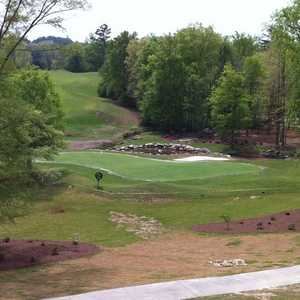