ELBERTON, Ga. - When you first pull into Elberton on Highway 17, it looks like any other small, Georgia town at first. A few small businesses on the outskirts, tidy frame houses, a chain restaurant or two as you get closer to what passes for downtown.

It's pleasant enough, but nothing really stands out; it could be any semi-rural 'burg you pass through on your way somewhere else, one of an endless series of dots on the Northeast Georgia road map.

Bu, then you start to notice things. The place looks solid. Yeah, that's it. A little too solid. Permanent, grounded, even eternal. That bank is made of granite. So is that restaurant. Wait a minute - so is that house.

In fact, you have stumbled into the self-proclaimed "Granite Capital of the World."

Yes, ever since they found the mother lode of granite in Elberton back in the 1800s, the town has hitched its economic and philosophical wagon to a rock that measures a seven or eight on the great scale of stone. Only precious gems and the heads of certain politicians are harder.

The place is one big memorial plaque. There were 45 granite quarries at last count. There is a granite association, a granite center, a granite museum (where you will be told to watch an 11-minute video on the nuances of granite) and even the 20,000-seat Granite Bowl, where the high school football team plays.

Then there are the Georgia Guidestones, a strange granite monument outside of town who's sponsors are said to be "mysterious" (the Chamber of Commerce?). The monument, Georgia's answer to Stonehenge, offers profound messages to mankind, including my favorite: "Avoid petty laws and useless officials."

The course is part of the Richard B. Russell State Park, about eight miles outside of Elberton and 50 miles east of Athens. It is not the most challenging of the state park courses, but it is overwhelmingly the most scenic.

The park and the course are situated on a peninsula that juts out into 26,500-acre Lake Russell, and architect Bob Walker has made full use of the water. Ten of the 18 holes have lake views,and the back nine in particular is about as close as you can come to a naturally pristine experience and still be on a golf course.

"We started with probably one of the best pieces of ground that I have ever worked on, in 32 years of work," Walker told TravelGolf. "I just couldn't have found a better site, honestly. (The state) pretty much gave me free reign. They said, 'Here's 400 acres, put the golf course wherever you need to.'"

Walker walked out to the peninsula point, where he envisioned holes 14, 15 and 16. The problem was, if he wanted to build the course there, the state would have to do an archaeological study to ensure there were no Indian artifacts.

Walker insisted, and though it took an additional eight months and $40,000, it was worth the time and money.

"That, really, is the most dramatic area of the whole golf course," he said. "That's a once-in-a-lifetime opportunity, to build three holes like that, particularly on a lake like Richard Russell. If it was a developer project, he'd put condominiums out there on the point."

Not only are there no condominiums on the point, there are no structures of any kind on the lake. Nor are there roads of any consequence nearby. The scenery is so peaceful and quiet, you may be tempted to stop playing and just drink in the surroundings.

"It was quite a revelation when I first walked the ground," Walker said. "I was just stunned by it. I walked out there about 6:30 in the morning, and I have never experienced such silence. I could literally hear two men sitting and talking in a boat about a mile and a half away."

The difficulty in such an off-the-beaten-track will be getting the word out.

"This is the first time I've been out here. Oh yeah, it's beautiful," said John Simpson, of South Carolina. "We'll be back."

The scenery is unquestioned, so luckily the course gives you a chance to enjoy it. While not overly easy, it doesn't penalize the golfer there to enjoy a view with his round.

"Hopefully they can keep their head down long enough to complete the golf shot," Walker said.

Walker said he had the average state park visitor and golfer in mind when he laid out the course.

"My philosophy there was to provide a variety of options to the golfer on every hole," he said. "I tried to design the course in a way that they could take chances and be rewarded with pars and birdies if they were successful, but not to penalize the average golfer with strong carries.

"We know there will be a lot of high handicappers and juniors and women playing the course, so each hole has a safe route as well as a challenging route. That was the theme throughout. You see some fairway bunkers located in such a manner to entice the heroic shot but, nevertheless, the golfer who fares best may be the one who plays those holes cautiously."

The course was actually completed about two years ago, but due to state budget problems, didn't open until July 2004.

The park has 28 camp sites and 17 cottages that can be rented. The cottages come complete with two bedrooms, all with gorgeous lake views, as well as fireplaces, screened porches and separate barbecue patios. They rent for $71-$91. Call (800) 864-7275 for reservations.

Not too many fine dining establishments in Elberton. Your best bet may be Clara Belles, a restored mansion where you can eat on the porch. It's at 92 College Ave. (706) 283-0640. 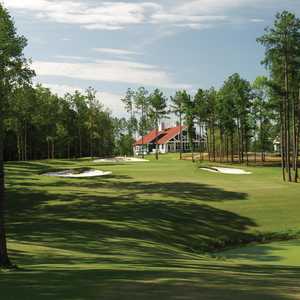 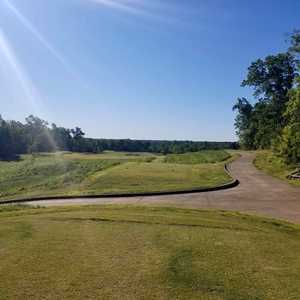