Stone Creek in Valdosta a country club in name only

VALDOSTA, Ga. - The Stone Creek Country Club, in the residential community of the same name, is a country club in name only.

The club allows outside play and you won't find many high-falutin' country club attitudes there.

"We call ourselves blue-collar," said Director of Golf Shannon Lamb. "We're more of a golf club than a country club. We're not a snooty-type country club. Everything else is secondary to the golf, the parties and all that.

In fact, they tout the bass fishing in Lake Neva on the course. How many country clubs tout their bass fishing? Only in south Georgia.

Lamb credits that philosophy to the owners, Valdosta residents Young Tillman and his sisters Sarah and Jeanette, as well as architects Rocky Roquemore and Jeff Burton.

The architects teamed with land-planners Franzman-Davis to come up with the layout, which blends in with the 735-acre planned community of Stone Creek, within hailing distance of Interstate 75, exit 22 to be exact.

Roquemore has designed a number of courses in the state and in the U.S., and overseas as well. Franzman-Davis has helped lay out plans for the Big Canoe and Reynolds Plantation in north Georgia and the southern portion of Amelia Island.

At Stone Creek, which opened in 1992, they took a former cattle ranch, moved some earth for the mounds, dredged the existing lakes and added some more while they were at it. The course is lined with mossy, old oaks - what part of Georgia doesn't have mossy, old oaks? - and has a semi-rural feel despite the homes that line it and its proximity to a major interstate.

There is also a sort of lowland swamp feel to it, though it lacks the claustrophobic feel frequently associated with swamps.

Roquemore's philosophy here was to cater to the neighbors. A survey by the golf club showed that about 60 percent of the people who live in the community were golfers.

"Because it's a residential community, they wanted it to be challenging but more of a fun course," Lamb said. "It's a family-type atmosphere out here, and they didn't want a course that would beat you to death."

Stone Creek doesn't beat you to death, but it does land a few well-placed jabs here and there. It's 6,707 yards long, and has a slope rating of 121 from the back tees, but it's capable of bloodying your nose if you don't keep your hands high.

It has a fair amount of water, such as the aforementioned Lake Neva. The fairways are fairly narrow, but most have mounds on both or one side of the them to keep the neighbors from getting too riled up.

No. 14, for example, is a 516-yard par-5 with the lake along the right and trees and fairways bunkers left. Big hitters can cut some of the lake, but remember it reaches around to the right front of the green.

"If you're a really long hitter you can get past that bottle neck and it kind of opens up for you and you can get there in two," Lamb said. "I'm not a long hitter and so I just usually bump it along the fairway on the left side and I'm about 135 yards out. It takes a big number out of play."

The par-3 fifth holes throws a tricky little angle at you, with the tee box being left and the green down to the right.

There aren't many serious doglegs, but for No. 9, which has two big oaks on the left.

"You've got kind of a little gap there," Lamb said. "But, there's St. Augustine grass under the oaks there, and it's pretty thick."

Stone Creek is a pleasant little country club course that will get you out of the Valdosta traffic and into a woodsy feel without testing you too much.

"Length is not a big thing here," Lamb said. "Basically, just keep it in play. It's really straightforward. Even if you miss with the driver, you're only about 150 yards out. The big hitters, if they can use their wedge, they can score well."

The Tif Dwarf greens are relatively small, but flat, with little undulation, though several have fairly sharp slopes, some to water.

"I like it because it ain't that hard, but you still have to play it," said golfer Bobby Sizemore. "It's got enough water to make you think, but you don't have to hit it a mile."

The home sites are mostly bought, sold and developed now - when 100 percent complete there will be 700 home sites - so it isn't as if you're playing one of the Georgia state park courses, as far as seclusion.

You can play this course if you're not a member, but mainly on weekdays. That may be why only about 10-15 percent of the course's play is outsiders.

The semi-private club gives preferential tee times to members on weekends. Green fees are $35 weekdays and $45 weekends. Seniors get to play for $25 Tuesdays.

Being near the interstate, the area has more than its share of chain motels nearby.

For something not quite so generic, try the Fairview Inn Bed and Breakfast on River Street in the city's oldest residential neighborhood.

Stone Creek has a full menu snack bar, banquet facilities and a country buffet every Wednesday.

There is a Sonny's close by, if it barbecue you're hankering for. For fine dining, try Lulu's Restaurant on North Patterson Street. 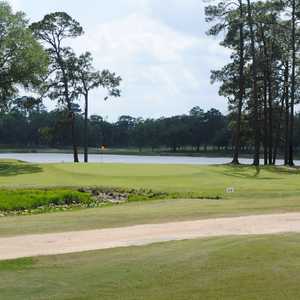