WAYCROSS, Ga. - One of the last things you expect to see as you drive through the seeming monotony of the south Georgia swamplands is a golf course.

The Okefenokee Swamp sits burrowed in a bowl-shaped depression roughly 700 square miles spanning south Georgia and north Florida. It's the biggest swamp in the country, 25 miles across and 40 miles long, a fact you won't dispute as you motor along its unending marshes, bogs, pine forests and thick snarls of vegetation.

The Indian name means "Land of the Trembling Earth," but the only trembling you're likely to do here is when you spot one of the hundreds of lurking alligators, their reptilian eyes and tooth-filled snouts just visible above the water line.

It may seem monotonous, but actually the swamp is home to an incredible array of plant growth and swamp creatures, many of them endangered or threatened.

It's an ecological wonder, the headwaters of two rivers that dominate this coastal plain. The Suwannee River flows south and west from the swamp's southwest corner, eventually emptying into the Gulf of Mexico, and the St. Marys River forms the Georgia-Florida border on its way east to the Atlantic Ocean.

With nearly 400,000 acres designated a wildlife refuge, you won't see much development of any kind.

That's one of the attractions of The Lakes golf course at Laura Walker State Park, one of eight courses the Georgia State Park system offers.

The course is only a few miles outside of Waycross, but make no mistake, you're deep in a southern swamp. The sense of splendid isolation is palpable.

The entrance on Highway 177 is right across from the Okefenokee Swamp Park, and you're more likely to see a dolphin than a house or condo. You may see deer, alligators, snakes and other swamp detritus.

If you play in summer you will definitely feel heat and bugs, and plenty of both. At one point, our twosome, playing under a brutal August sun, couldn't tell if we were getting wet from a light, summer drizzle or heavy humidity that seems to rise from the earth.

The course itself is short at 6,595 yards and deceptively open.

"It lulls you," said assistant pro Matt Peters. "There's a lot of room between those trees, but the trees are very penalizing. If you keep it in the fairway, it can be a very easy course."

It's true: thick palmettos and "love grass" in the rough will have you wary of rattlesnakes and reaching for your hybrid, "rescue clubs." Is that a guy hacking at a snake or trying to get it back in the fairway?

Architect Steve Burns used native sand for the 29 bunkers and waste areas, and put in some longer holes, like the 549-yard 13th hole, to offset the shorter ones, like the 300-yard, par-4 on No. 12.

He also installed sloping and moderate to severe undulating greens to make it more interesting.

"On the greens, you really have to pay attention," Peters said.

There are enough strategic holes to make the day trip to the course interesting.

No. 1, for example, is a 375-yard par-4. The left side is open, but big hitters should be aware of the trees far down the left side of the fairway.

The 397-yard par-4 on No. 5 has a "speed slot" just right of the bunker on the left side of the fairway. "If you choose this option, you risk hitting your tee shot in the bunker," Peters said. "Make sure you hit your approach shot to the correct part of the green, as there is a large slope that divides the right and left sides."

The seventh is a reachable par-4, but No. 9 is a 449-yarder, mostly into the wind. There is water down the right and a fairway bunker on the left. If you bail out, do it toward the bunker because you can still play out of it.

No. 12 is a good risk/reward situation. The green is reachable, but avoid the bunker in the middle of the fairway; it can take a stroke or two off your score.

A drive down the left side of the finishing hole will shorten it, but the safer play is down the right side, lessening the chance of bringing the water or the bunker on the left into consideration.

The quality of the course, combined with its sense of natural isolation and its swampy uniqueness, keeps golfers driving to it from as far away as Jacksonville and Brunswick.

It's cheap, too: unlimited green fees on weekdays are $17, and the weekend rate for 18 holes is $22. Carts are $13, and there are special rates for juniors and seniors.

Being fairly close to Interstate 95, the course draws it share of snowbirds.

"I almost always swing by and play this course," said William Lanier, a high handicapper who usually drives to Florida in the winter, but was making an uncharacteristic summer run to see his new grandson. "We camp here in the park. You can't beat it for the price."

Another option is The Inn at Folkston Bed and Breakfast, a bungalow-style structure typical of homes built here in the early 20th century; it's 10 miles from the swamp's eastern entrance. (912) 496-6256.

Along with the usual assortment of fast-food, barbecue joints and chain restaurants, there are: 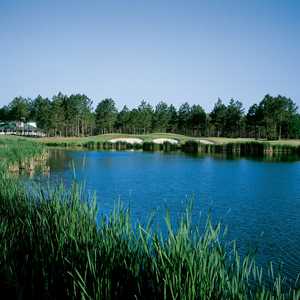 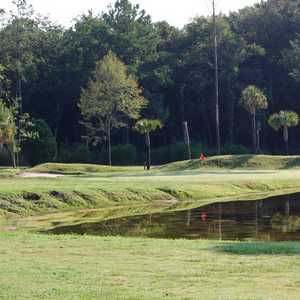