Bartram Trail Golf Club in Evans is situated just minutes from Augusta National. Despite the fame of its neighbor, Bartram Trail stands out for being Columbia County's only public golf course. It has a location next to Patriot's Park that provides forests of mature hardwoods and pine trees that were fully utilized in the design.

Thousands of people pour into Augusta each year to attend the Masters, but there's more to the city than the first major championship of the golfing season. Augusta is the second-largest city in Georgia and has a rich tradition in the fields of medicine and the military.

Augusta is home to the Georgia Health Sciences University (formerly the Medical College of Georgia), which has trained physicians since 1828. Along with the University Hospital, the medical field employs more than 25,000 and has an economic impact of $1.8 billion. There is a strong military presence with Fort Gordon, home of the U.S. Army Signal Center.

Downtown Augusta has been revitalized partially because of development of Riverwalk Augusta, a riverfront park that runs along and on top of the city's levee. Augusta Canal has a bicycle and walking path and Aqueduct Park is a lagoon that has been converted into a park and swimming site.

There are three professional sports teams in Augusta: the Augusta GreenJackets baseball team, the Augusta Riverhawks hockey team, and the Soul City Sirens roller derby team. Tickets to all sports are readily available.

And while Augusta National is the most famous landmark in the city, visitors will hardly even know they're driving by one of the greatest golf courses in the world. Fences around the course are lined with green screens and there are few signs off Washington Road to indicate the presence of the course that Bobby Jones built. And, if you do find it, don't bother asking the guard at the entrance if you can drive down Magnolia Lane. It would be easier for you to talk your way into the Oval Office.

There are, however, several golf courses in Augusta that are accessible to visitors, including Forest Hills Golf Club, established in 1926. The course serves as home to the Augusta State men's golf team, which won the 2010 NCAA Championship. Goshen Plantation is an Ellis Maples design that has hosted many qualifiers and competitions for the Georgia State Golf Association. Jones Creek in suburban Evans is a Rees Jones design that is annual ranked as one of the best golf courses in the Augusta area; it was recently renovated by Tom Fazio.

Augusta's climate is conducive to golf almost every month. There are a few cold snaps in the winter, though the summer heat and humidity can be oppressive. 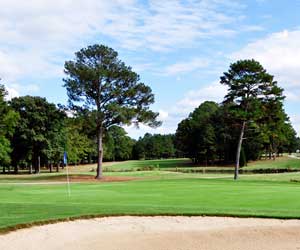 Latest reader ratings from this area