JEKYLL ISLAND, Ga. -- There are few places that can match Jekyll Island when it comes to providing a complete family-friendly entertainment package that won't break the bank.

The Oleander is considered the most difficult of Jekyll Island Golf Club's three 18-hole courses.
«

Jekyll Island Golf Club is Georgia's largest public golf facility, offering three 18-hole courses and a nine-hole course. Two of the 18-hole courses, Pine Lakes and Indian Mound, have similar characteristics since they sit side by side. The Indian Mound Course is the shortest of the three at just under 6,500 yards from the back tees but that is not to say you won't run into a fair amount of challenges.

Jekyll Island Golf Club offers 64 holes of golf, making it the largest public golf facility in Georgia. The club features three 18-hole courses and one nine-hole course. Pine Lakes is the longest of the three full-length courses at 6,700 yards from the back tees, though the course is not lengthy by any means.

(based on 2 reviews)
See all reviews | Submit your rating

There are three 18-hole courses available at Jekyll Island Golf Club, making it the largest public golf facility in Georgia. The Oleander Course is the club's original layout and still remains the most difficult. Don't be fooled by its seemingly modest yardage, there are plenty of challenges in store. The course features tight-, tree-lined fairways and an abundance of water in play throughout.

The accommodations are affordable, the beaches are quiet and scenic, and the golf courses are varied and affordable.

"What I tell people is how peaceful it is," said Rob Ellis, the director of golf at Jekyll Island. "The pace just slows down. We call it 'island time.' Everything slows down and feels like you're back in time."

The golf is especially attractive for travelers. Jekyll Island Golf Club, the largest public facility in Georgia, features three 18-hole courses and a nine-hole layout that goes back to when the island was the private playground of the nation's richest families. It's fairly easy to reach, too; Jekyll is located between Jacksonville and Savannah, about an hour away from each.

"You get out there and there are no houses," Ellis said. "It's just you and the golf courses."

The three 18-hole courses are Oleander, Pine Lakes and Indian Mound. They share a common clubhouse, practice range and putting green. A new teaching facility is under construction. While each course is similar -- the layout is understandably flat -- there are differences that make each course distinct.

A lot of the locals consider Jekyll Island Golf Club's Pine Lakes Course as their favorite. Part of that favor is due to the 2002 renovation and included redesigned greens and improved drainage, which makes it the course in the best shape at Jekyll Island.

Built in 1968 by Joe Lee and Dick Wilson and renovated in 2002 by Clyde Johnston, Pine Lakes is the longest of the three courses. But it still only plays 6,700 yards from the back tees.

"People like it because they're not just hitting a wedge into every green," Ellis said.

The 17th hole is a very difficult par 3. It plays 202 yards and requires a carry over a huge bunker on the front right to a green that's almost encircled by two bunkers, with a pond at the back.

The Indian Mound Course at Jekyll Island Golf Club was designed by Joe Lee in 1975 and may play longer than its 6,469 yards seems. The par 5s are a bit more difficult than the yardage suggests, but there are some definite birdie holes among the par 4s.

"It has some of the best holes," Ellis said. "A lot of people think it's the most fun course to play."

Indian Mound also has some challenging greens, with undulations that will likely leave you shaking your head.

Considered the most difficult of the three 18-hole courses at Jekyll Island Golf Club, Oleander requires an accurate day of driving the ball in order to find success.

The course maxes out at 6,521 yards from the blue tees, but most of the holes are lined by trees and there's plenty of water that comes into play on this 1964 Dick Wilson design. And since Oleander is the closest of the trio to the Atlantic Ocean, you'll typically have to negotiate the ocean breezes at some point in the round.

"It's the best shot-making golf course," Ellis said. "It's the toughest course, the one with the smallest greens and the biggest challenge."

The 18th hole is a handful. The 417-yard par 4 doglegs right and requires an approach shot over a portion of a pond to a green that is guarded by a bunker in the front. Many high school titles were lost on this hole when Jekyll Island served as host for the state championships.

The enjoyable nine-hole layout has a different clubhouse, accessible from the main road that runs along the beach.

Great Dunes is what's left of the original golf course that Walter Travis built around the turn of the 20th century. The par 36 plays to 3,298 yards and features some of the smallest greens you'll encounter. Particularly appealing is the fifth hole, a par 5 dubbed "Mae West" because of the two mounds that block your view of the green upon the approach.

"It's unlike anything else you'll ever play," Ellis said. "It's wide open and you get a view of the ocean on a couple of holes. Where else can you play for $10 and have a view of the ocean? Nowhere that I know of on the East Coast."

When in Jekyll Island be sure to meet Johnny Paulk, the director of golf emeritus. Paulk is a member of the Georgia Golf Hall of Fame and has been the announcer for the 18th green at Augusta National during the Masters since 1979. The friendly Paulk has been at Jekyll Island since 1968 and is always ready with a handshake and a story. 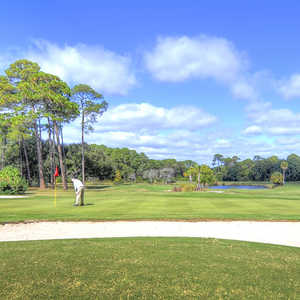